50|50 is a six track EP from Coventry rapper Shakezpeare and Manchester’s Dr G. This is a release to get you warmed up for the long awaited project ProblemChildGrownUp which drops next year. The release has already been featured in Bandcamp’s best selling releases and we’re sure that 50|50 will impress. Hip-Hop is in the building…

Shakezpeare is a Coventry rapper who has been consistently releasing music for the last few years. His raw, undiluted sound has led to him gaining support in all corners of the UK as well as Europe and USA. He has featured on tracks alongside Rap P from New York, Genesis Elijah, Novar FLIP, as well as working with Dr. G on his forthcoming album ‘Problem Child Grown Up’.

He has shared stages with the likes of Skinnyman, Tony D, P Money, Malik MD7, Reveal, Wordsmiff, Redbeard and many more, as well as touring with Wu Tang and Wisemen rapper/producer Bronze Nazareth and Detroit’s Rocknrollaz. Shakezpeare always delivers an electric performance and in 2016 has already been chosen as an official support act for Killah Priest’s UK tour in May. As well as being a respected solo artist Shakezpeare runs Snakeyez TV, a media channel that supports underground music with freestyles, interviews and music videos.

Shakezpeare is currently working with the talented UK producer Roll Blunt and Wu/Wisemen’s Bronze Nazareth on a forthcoming project, as well as being an official support act for Killah Priest’s 2016 UK Tour.

Check out these music videos:

Check out his previous releases:

Big Ribzy is back with a new single and video in “No Games”. This is the 2nd single off of his Platformz Records debut of the same name.

With visuals from Snakeyez TV Ribzy shows us that life in Wolverhampton can be just as dangerous as any other place where life is scattered with bad influences and tough choices. Letting off his bars over the aggressive banger from Rediculus, Ribzy tells you with no uncertainty “Know who you’re fucking with, check the CV”.

With appearances from label mates Trademark Blud and Tricksta, Ribzy is playing No Games as he moves through the underground on his way to breaking through.

Big Ribzy has recently been playing live up and down the UK sharing stages with the likes of Skinnyman, Wordsmiff, Phili N Dotz, Genesis Elijah, Malik MD7 and many more, as well as playing at this year’s Boom Bap Festival, where Your Old Droog, Earl Sweatshirt & Jeru The Damaja headlined. With a string of solid releases such as his UK Runnings mixtape ‘King Size Blues’ hosted by Tricksta and an underground album ‘Blunts & Insecurities’ produced by Lost Alliance under his belt these releases have solidified Big Ribzy in the UK. Now with this brand new EP already getting support from tastemakers & DJ’s, the future looks bright for this Wolverhampton talent. 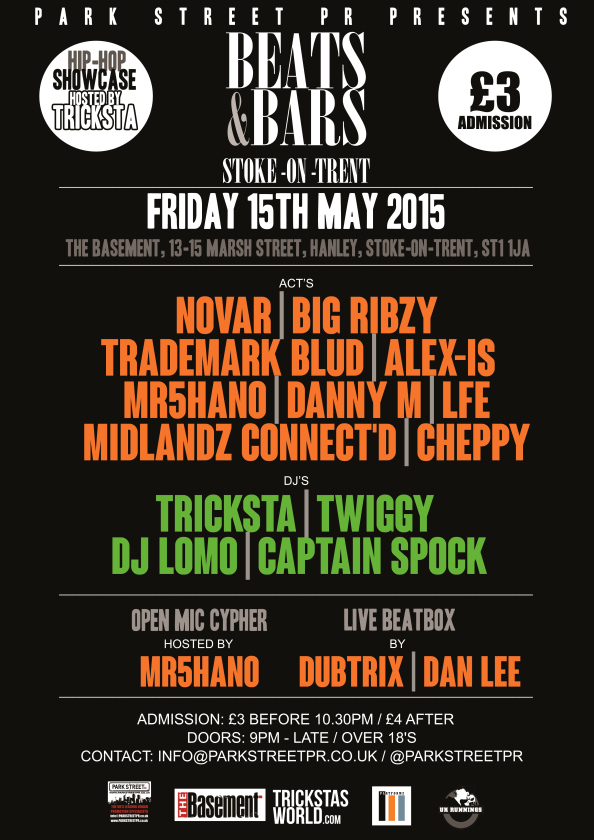 Beats & Bars comes to Stoke for its first event at our new home The Basement. For our first event we’ve got a superb line-up of live acts, deejays and beat-boxers for you, as all as an open mic cipher for local artists to get involved. Expect electric performances as well as some of your favourite tracks getting played! Beats & Bars Stoke has arrived… get ready to represent and get you that real Hip-Hop essence… like Afrika Bambaataa said Hip-Hop is ‘Peace, Unity, Love and Having Fun…’

For our first event we have London rapper Novar (formerly known as Supar Novar), who was labelled a ‘UK legend’ by SB.TV and has been an integral member of the UK Hip-Hop scene for over twelve years. As a member of the legendary UK rap group ‘The Mud Family’ with acts like Skinnyman he went to release an album on Kemet Records, the same label that released Klashnekoff’s ‘Murder’. Novar has performed at Glastonbury, as well as sharing stages with Ghostface (Wu-Tang), Bone Thugs N Harmony, M.O.P, The Clipse, DJ Premier and many more, collaborating with super stars such as Dappy from N Dubz and Ashanti, and featuring on classic underground records with Foreign Beggars, Ed Skrien, Wordsmiff, Genesis Elijah, Skinnyman, Doc Brown and many more.

Also on the night we have performances from three Midlands acts that have all recently been signed to Chicago record label Platformz which is run by producer Rediculus. Trademark Blud, Big Ribzy & Alex-is will all give up solo performances which will include forthcoming material from the label as well as some of their more well known anthems. All three rappers this perform at Boom Bap Festival as well as having dates booked this year for Manchester, Canterbury, Birmingham, Wolverhampton, Cambridge, Chester, Swindon & Telford, with more dates coming. This will be backed with a string of local talent too, offering a chance for local heads to see their acts show & prove! We’ve got a brilliant selection including co-host and co-promoter of Beats & Bars Stoke Mr5hano, Midlandz Connect’d, Danny M, LFE & Cheppy.

DJ support comes from the legendary Tricksta, a Wolverhampton DJ/Producer who founded Beats & Bars back in 2012. He runs leading PR Company Park Street PR which represents UK & US acts, as well as being behind UK Runnings Mixtapes, the UK’s longest running mixtape series that was founded in 2001. He’s been DJ’ing 26 years this year and has played all over America in Miami, Los Angeles, Houston, San Francisco & Houston, as well as Sweden, Holland, France, Switzerland, Turkey and more. Tricksta will also be joined by Beats & Bars Wolverhampton resident DJ Twiggy, who is currently working on a production EP, and Beats & Bars Stoke resident DJ’s Lomo & Captain Spock, and Beat-boxers Dubtrix & Dan Lee.

DJ’s on the night:
TRICKSTA & TWIGGY 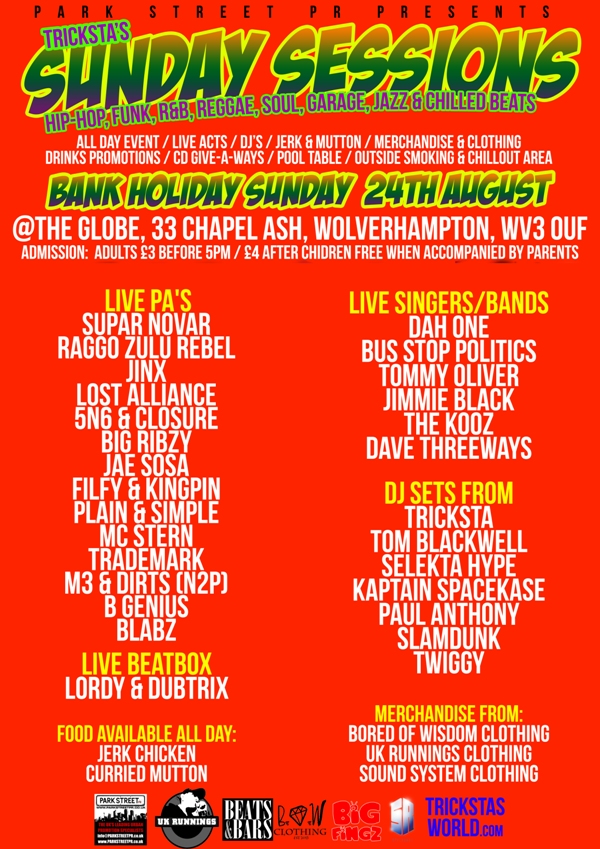 Tricksta’s Sunday Sessions returns for a Bank Holiday special that promises to be something special. With a national line-up of acts and deejays, Sunday Sessions is an event you don’t want to miss!

Admission: Adults £3 Before 4PM / £4 After / Chidren FREE when accompanied by parents