Supar Novar and Cre8 go in!

Listen to this, give your ears a treat. This is how you do a hip-hop ‘love’ song without being cheesy or corny, take note.

Posted by hiphoplifeandtimes on December 27, 2012
Posted in: Reviews. Leave a comment 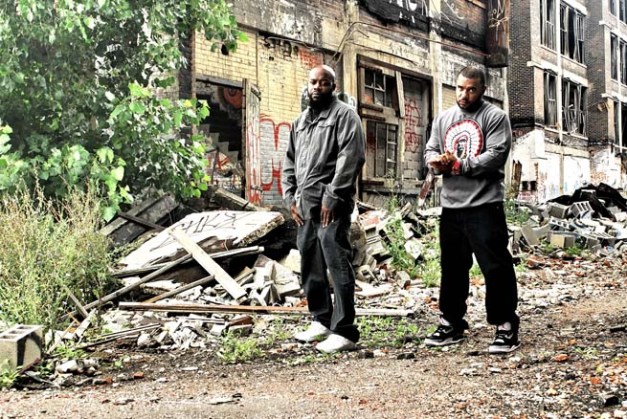 Motor City brothers Apollo Brown and Guilty Simpson have wasted no time pounding the pavement for Dice Game. In the past few weeks Apollo has toured Australia and New Zealand while Guilty did a lean and mean west coast run that spanned Los Angeles to Seattle before hitting the NBC/Universal lot to be on Carson Daly’s show.

Today, while our road dogs get a breather, they release the all new, non-album, bonus track “Parkour” to announce the release of their new limited edition wax (ivory vinyl w/ bonus 45 featuring two non-album cuts). This first bonus, named after the military training parkour where practitioners need to burst through an obstacle course using the terrain to gain advantage. In similar fashion, Guilty takes the terrain laid out by Apollo Brown and powers through it like a linebacker with a vengeance.

Posted by hiphoplifeandtimes on December 27, 2012
Posted in: Album Releases. Leave a comment

After the superb Rediculus“How To Hold A Mic” video featuring Soul Khan, Sadat X and The Day Laborers we are proud to bring you Rediculus Presents: The Morning After – 2012 Remixed and Revisited. The dope 17-track project brings new life to some already Certified fresH joints. Rediculus says it best:

The project came about because I felt that after having our best year ever, Knowledge Giving Birth and Rediculus fans deserved something hot. Instead of just repackaging an end of year album, I reached out to some very talented friends of mine to remix and reimagine some of the material we’ve presented over the past 14 months to give a fresh set of legs to some phenomenal music. I’m exceptionally proud of the Masters of Conversation album, The Lost Things album, Rich Malones project and Big Dutty Deeze’s debut album. In 2012 we really put things in motion to situate ourselves to deliver more quality material in 2013 than ever before, and that is directly due to the support of blogs like Kevinnottingham.com and the fans that such support direct towards the music, so I felt this was the best way to give back to that and thank them for all that has gotten us to this point.

You can say thank you to Rediculus and Knowledge Giving Birth by streaming and copping Rediculus Presents: The Morning After – 2012 Remixed and Revisited. The project features an ill line-up of emcees like Emilio Rojas, Rich Malone, Koncept, Ruste Juxx, Sha Stimuli and so many more rocing over backdrops from Irish Moss, J57, Audible Doctor and maticulous. You need to dig into this one.

Ten points for having the best name for a group I have heard in years. For fans of Leaf Dog, H.L.I, BVA, Split Prophets.

You can also download their EP ‘The Hills Have Mouths’ over at bandcamp for ‘Name Your Price’.

All I’m saying is, if you claim to love East Coast hip-hop and don’t want to pick this up immediately then well, I just don’t know if we can be friends anymore.
A Clean Does Of Music is a DJ VR offering, via the Dope Shit Recs camp, and it came out a few months ago but you’ve still got time to go get this and still claim to people that you bought it the year it was released. I’m going to leave you with the list of artists featured, I think that’ll help you decide whether you think you should be giving DJ VR and the DSR camp some hard earned cash.\

For those of you keenly following every article and post we put up on the site, or just those of you that are simply interested, then you may well remember we posted up a album cut and mixed by Pragmatic Theory entitled ‘Summer In The City’. The LP’s full of a plethora of MCs, both from the US and the UK. The album was and is a fantastic release, showcasing some awesome rappers, with intelligent and well versed wordplay, all rapped over some ridiculously tasty beats and instrumentals. We probably told you to drop a few bucks, stop giving Starbucks your money (PAY YOUR TAX) and buy that release.

Well Pragmatic Theory member, Keith Price has recently dropped his own solo beat tape entitled ‘Bunch Of Fives Vol 1’. The beauty of this tape is that it was made with SP 505, overdubs, absolutely no sequencing, a bunch of vinyl and a turntable. Considering so many DJ’s can’t enough of sequencing, this is pretty impressive; plus I’m always a sucker for some live cutting, especially when it’s done this well. ‘Bunch Of Five Vol 1’ is the first in a series of 5 beat tapes, followed by a vocal album ‘From the Low Point’ in the very near future. You can pick this up for a big old nothing over at his bandcamp.

For fans of Souls of Mischief, Abilities, Ant (Atmosphere, Felt).