Edward Scissortongue is one of the most debated MCs in the UK right now.

There is a section of people who don’t rate him, who call him a pagan (yep those sort of twats) and say he dresses like a hipster. Yeah because that’s the sort of thing that influences whether or not someone’s music is any good; skinny jeans. Dickheads. The supportive side of this spectrum is fierce. They will tell you Scissor spins ideologies, that he perceives things in a very unique way. Personally I would have to say that his ability is clear and evident. It’s more a case of going over people’s heads. I mean if you want something easy to consume then the Theremin E.P is probably not for you. Not that it’s some overly deep pretentious manifesto, just that it requires you to really pay attention and think.

Scissortongue’s debut solo effort Better Luck Next Life announced him as a serious contender for our attention. It shone out as something very different in an over saturated market of bland rappers. I would hazard a guess that he would be the worst person to play scrabble against as the vocabulary he possesses is phenomenal. Carving turn of phrase like very few others. Although I still don’t know what the fuck a rangoose quackathon is haha…

As a follow up effort to B.L.N.L, The Theremin E.P is an even more intricate web of imagery. Taking you further down into the rabbit hole of Scissor’s mind. An eerie instrumental track kicks off the e.p and perfectly sets the mood of the journey about to be undertaken by the listener. I say journey because that’s what Scissor’s music is to me, not just verse chorus verse tracks he creates full songs. The depth of subject matter and introspective musings are refreshing in a world of pound cake remixes about how much cash you may or may not be stacking. To make an attempt at simple descriptions of what he talks about on each track would not only sell them hugely short, but I would probably see them differently to you, as you would see them in another way to someone else. With a mind-bending poetic style Scissor is one of the most exciting artists in the game.

Though often splitting opinions fiercely he has most people speaking his name and this release will surely see that this continues. Especially when bolstered by psycho active production from Dirty Dike, Sumgii, Miles Courtney, Eon Ra and Konchis. I don’t think you’d hear the beats they’ve supplied on this E.P on most rappers releases, but they really provide the musical canvas perfectly for scissors reality and fantasy blending tales.

Riding the mega wave that is High Focus, Scissor has delivered one of the labels standout releases to date here in both quality and creativity, and I imagine he’ll only strengthen with each effort. This is one for those late night headphone blaze ups, when you really have the time to take in just what it is he’s created here. Looking forward to seeing what it is he comes with next.

You can pick up a copy of The Theremin EP right now by clicking the links below.

Whoever came up with the idea for Kickstarter was an absolute genius. Yeah, yeah I know Captain Obvious strikes again; the sky is blue, ducks like water whatever. From an independent music stand point however you can’t deny that it’s become invaluable to artists in the last few years, as well as bridging the gap between a fan and their favourite musician. Although truth be told I suppose if you really wanted to talk to your favourite indie rapper chances are you can still send them love letters disguised as tweets, and you’ll probably get a nice response. Have I done it? Of course I have c’om on now how am I?

Anyway for those not aware, Bambu is one the most respected and (In my humble opinion. Actually no it’s not humble, I’m right) and talented rappers currently making music right now. He’s also an active community organiser, and spends just as much time working with people as he does talking about it on his records. That concept might seem a little nutty to some but yes it is possible. Bambu has recently started a Kickstarter to fund his latest project ‘Party Worker’. As with most KS campaigns you’ll get all the usual audio bonuses and early downloads/physical copies, but with this one you get a whole lot more. Due to Bambu wanting to write a record directly influenced by workers, there’ll be a yearbook documenting the working people inspiring the different tracks, interviews and exclusive webisodes. Not to mention all the nice clothing, snapbacks, HANDWRITTEN VERSES (I capitalised it because this is fucking rad and you need to share in my excitement), exclusive videos, content and a whole lot more.
Actually you know what? Stop listening to me and listen to Bam instead.

Whoever wins these two golden tickets, I would like to remind that without our humble site you might have never known about the competition and would have never won the tickets in the first place. With that in mind I think you should probably take me with you. Safe.

You want tickets to see Big Daddy Kane and Too Many T’s? Of course you do, don’t be dumb. I’m going to copy and paste because this is all you need to know.

Enter our draw for a chance to win two tickets to see Big Daddy Kane at London’s prestigious Jazz Cafe, in Camden on Friday 2 May – Tickets for this show are SOLD OUT!

Big Daddy Kane, a Brooklyn, New York M.C. who undisputedly defined the term “lyricist” in the world of Hip-Hop. Along with the lyrical ingenuity he brought to the genre, he also introduced innovative live performances as well. A huge influence on a generation of MCs, Big Daddy Kane is one of Too Many T’s favourite rappers – we paid tribute to him on our ‘Beats We Wish We Had project‘. This is an exclusive NOT-TO-BE missed show, and all you have to do to enter is fill out the form in the link.

Posted by hiphoplifeandtimes on April 16, 2014
Posted in: Downloads, Music Videos. Leave a comment

Here’s a dope single from Gambit Ace & Mikey Smith who drop their debut single from their forthcoming release FTLOM VOL1 which is out May 12th 2014 via http://www.ftlom1.bandcamp.com. Love how the beat is lively and the lyrics are heavy with a massive salute to all their supporters. Quality track that’s got me excited to hear the rest of FTLOM. Big tune.

Posted by hiphoplifeandtimes on April 16, 2014
Posted in: Music Videos. 1 Comment

Posted by hiphoplifeandtimes on April 16, 2014
Posted in: Events. Leave a comment 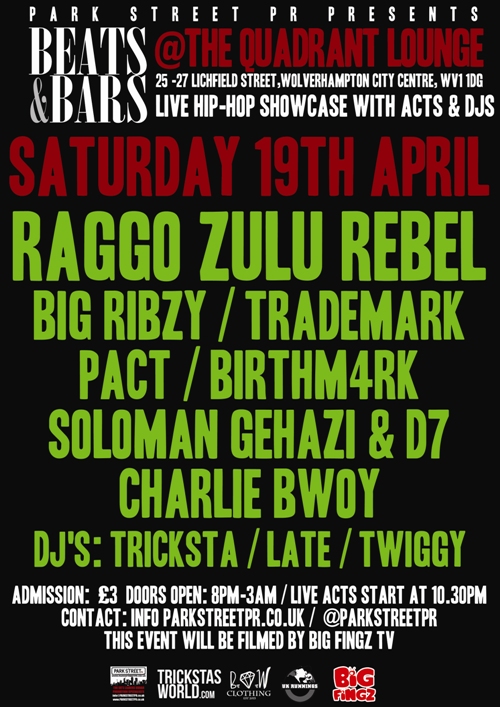 THIS EVENT WILL BE FILMED BY BIG FINGZ TV

Posted by hiphoplifeandtimes on April 4, 2014
Posted in: Events. Leave a comment

Only 500 tickets available so do not delay!

The Doctor’s Orders are on the move again this time to one of the best clubs in London, Plan B, but the incredible line ups of the best names in Hip-Hop remain a constant.

Back in Brixton again having sold out the venue last time is the producer responsible for the birth of Little Brother and huge hits for the likes of Drake, Jay-Z, De La Soul, Erykah Badu, Destiny’s Child & many more, the incomparable 9th Wonder. He will be spinning an exclusive UK set while one of stars of his Jamla Records camp & the hottest lady on the Mic Rapsody will be performing live.

Also coming in from the states to bless the decks for the very first time in London is Madlib’s younger brother and another extraordinary beat smith the brilliantly named Michael Jackson aka Oh No. One of the most prolific members of the Stones Throw family with 13 full length albums, his sound is pure Hip-Hop as his projects as Gangrene alongside The Alchemist and work with the likes of Danny Brown, Talib Kweli, Mos Def & more.

Tall Black Guy is hands-down one of the most exciting producers to hit the scene in the last couple of years. Starting as many do with a some seriously exciting re-edits of classic soul and Hip-Hop tunes he has graduated to release his first full length EP as well as produce for a host of MC’s. His sets are a brilliant combination of pre-record and live remix that are not to be missed!

Joining this all star line up are two of The Doctor’s Orders residents in the shape of Spin Doctor & Rusty Ryan as ever they will make sure the party starts of right and ends with a bang not a wimper!

Saturday 5th April: Doin’ It In The Park Screening & Q&A
Bobbito drops by to answer a few questions, Signing and to show us his film on NYC Pick Up Basketball

Friday 10th May: Georgia Anne Muldrow & Dudley Perkins @ Plan B (Ahead of #TDO306)
The soulful duo will be blessing the stage in Brixton alongside DJ Romes & Wildchild from the legendary Lootpack

Friday 10th May: #TDO306 – 9th Wonder & OH NO@ Plan B
9th Wonder is back with his unmistakable sound & Skill accomponied by the genius that is OH NO