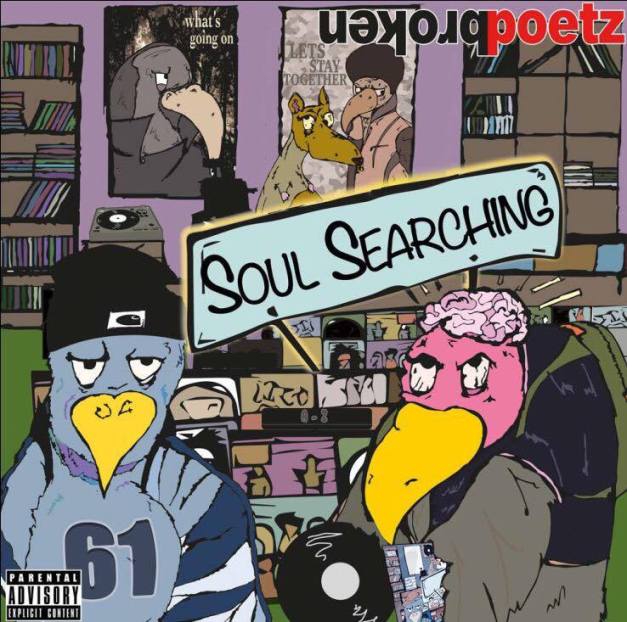 Back in June Andover, UK duo Broken Poetz dropped this dope open and honest album ‘Soul Searching’ on KBTZ Recordings at a time when the site was inactive. An album that was two years in the making, it was only right that now things are kind of getting back on track here at HHLAT we fully rep the album because we think it’s one you should add to your collection! Here’s what Adam had to say about ‘Soul Searching’…
It’s too easy to get over serious in the the judgy waters of Hip Hop, even more specifically in UK Hip Hop it seems at times. Every so often you need a little reminder that art is to be enjoyed more than it is scrutinised, and that’s exactly what Broken Poetz newest release ‘Soul Searching’ did for me. I listened to it through a bunch of times to think of stuff to write, except I kept just enjoying it and not thinking about why, kept nodding my head instead of thinking of witty ways to heap praise on a deserving release.
For those unfamiliar with Broken Poetz they are D-Know and Mystero, a duo of naturally gifted emcees whose genuine sound and character has found them consistently gain not only more and more support, but produce better and better art. The two of them are such a cohesive act that you get a proper group feeling instead of just two good artists that don’t quite match, the extent of this is so massively important to what makes the Poetz music something you don’t ever want to sleep on.
Both members are individually strong with flows and lyrics that have so much heart and passion that it’s inescapable, strong with presence and relatable content throughout ‘Soul Searching’. They sound at home to a degree that you can’t buy, in an age of a thousand rappers they cut out their own way through the pack and I’d doubt they even give a second thought to anything other than doing their thing. Nothing here sounds forced its all about confidence with Broken Poetz, their overwhelmingly positive vibe and calm nature even has you rocking a grin when they are dealing with negative issues, because they aren’t just moaning or venting but it’s more like their self therapy, it’s more like they are saying ‘yeah it’s trying to get us but we’re all together here’.
‘Soul Searching’ is bolstered with features from CW Jones, Twizzy, Upfront and Cutta Chase the album is a lyrical wonderland that you can’t not enjoy (wahey double negative) set to a musical backdrop of massive vibes and soulful sounds from names like Runone and Molotov, DJ Jabbathakut and Hozay. Hip Hop is meant to be enjoyed and not picked apart and I thank Broken Poetz for their efforts to remind me.
Words; Adam
‘Soul Searching’ is out now and available for digital download here
and also CD format here https://brokenpoetz2.bandcamp.com/album/soul-searching
iTunes https://itunes.apple.com/gb/album/soul-searching/id1120529832
Amazon https://www.amazon.com/Soul-Searching-Broken-Poetz/dp/B01GIXF8AO
Broken Poetz – ‘Made Up My Mind’, Produced by Runone & Molotov was the first visual released from the album.
Check the second visual for one of the standout joints on the album (imo, Stix) ‘Men Who Will be Men’, produced by Hozay
Connect with Broken Poetz
Facebook: https://www.facebook.com/BrokenPoetz
Twitter: https://twitter.com/brokenpoetz1
Instagram: https://www.instagram.com/brokenpoetz/
Bandcamp: https://brokenpoetz2.bandcamp.com
Soundcloud: https://soundcloud.com/broken-poetz-official