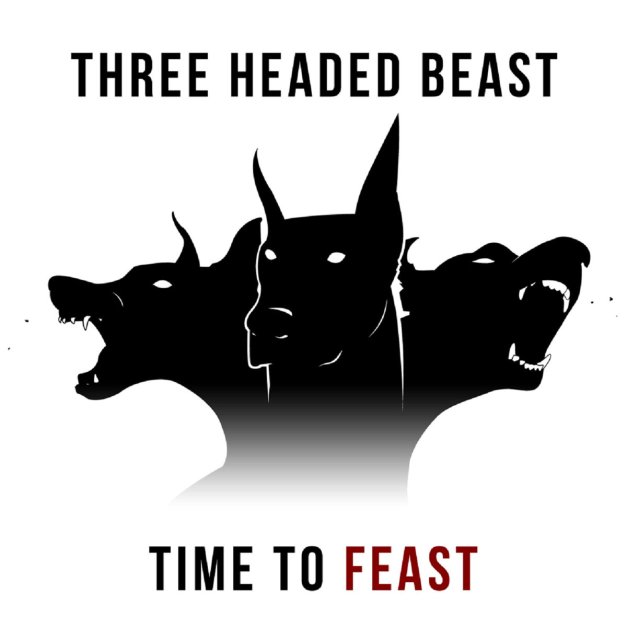 If you’re a regular follower of HHLAT you will know we’re big fans of Three Headed Beast the talented emcee trio of Twizzy, M.A.B and Jinxsta JX. At the end of July they dropped their highly anticipated debut album ‘Time To Feast’, we had a reviewer in place to get something up in the week building up before release, but we were let down by said reviewer.

However with the help of Adam sharing my FB post looking for reliable reviewers, rapper Intuitive offered his help and Big Ups to him for stepping up and taking on the review and getting it back to me in quick time. Here’s what Intuitive thought about the album…..

When I discovered that my first ever album review was going to be a Three Headed Beast release, I smiled.

I’ve been following these dudes ever since I came across Twizzy’s solo release ‘Done With All The Bull’ (which is fucking excellent, by the way) and discovered that he also operated as part of a neck-snapping super-trio alongside fellow emcees M.A.B and Jinxsta JX. They are all certainly not new to the game – one listen to their practiced flows will tell you that – but recently, they took a 2-year hiatus from their group music to focus on solo work. ‘Time to Feast’ is their latest contribution to the UK hip-hop history books – a 15-track boombap album with features and production from heads that are such household names, if you haven’t heard of them then you have probably reached this site accidentally. Seriously, it’s like a UK bedroom rapper’s wet dream. Features from guys like Genesis Elijah and Task Force associate Remus, and production by man like Farma G, Diligent Fingers, Charlie Mac and Chester P?!  Fuck off!

Having respected heads featuring on your shit doesn’t make your tracks good, however. I’ve heard plenty of upcoming artists ruin their own tracks that have big names on (and probably throw away a week’s wage at the same time) because of silly little things like song composition and structure, or by selecting an awkward or shitty concept for your feature to have to try and work around. 3HB (I’m putting that from now on, it’s easier to type and I’m lazy) have circumnavigated this problem excellently in this release and have really made full use of every single feature that they have collated, by creating really inventive musical hooks that break up the monotony of verses and add soul and character – a perfect example is Javeon’s absolutely stellar effort on ‘Control’ – a solid song in its own right, the hook transforms it into a really powerful and truly musical piece. I was also slightly shocked to hear Genesis Elijah on the hook for his feature on ‘Marching’ but actually it works really well – I was just disappointed I didn’t get to hear another of his legendary verses!

I don’t care how weird this sounds. The production is sexy. Crisp drum loops and melancholy samples make for an album of instrumentals that not only make you worry about the structural integrity of your vertebrae, but also have a definite consistent feel, which I think is always a positive thing. It was really hard to pick out any stand-out beats but I think Hutch’s effort on ‘Be Careful’ deserves a special mention – this is definitely one of my favourite beats from the album and also one of my favourite tracks.

Speaking of favourite tracks – I feel as though we need to talk about ‘The Return’ as well. Because it’s fucking great. What a way to kick off an album! I LOVE the wordplay on the hook – a veritable waterfall of ‘3/free’ prefixed language – it takes a couple plays to catch every word, but it’s a really clever way of making a hook sound and flow smoothly. Plus, it takes some brains and musical/lyrical awareness to do it properly, and I always appreciate that kind of technical ability. Another way that this song is really clever is in how each of the 3 verses has the same two adlibs (‘what you REP?’ ‘so break it DOWN!’) in them which structures each verse, gives them some continuity and unifies the song, and sounds ace at the same time. Even as I’m writing this, I’ve got “it’s the return of the three headed BEAST!” going round and round my head, like a baby in a washing machine. Or a wheel, or something.

In conclusion (GCSE English essay style) this is an absolutely solid piece of music that deserves real support and praise from the underground scene. Every single aspect of it has been carefully considered and finished to a high quality – from delivery, to complex doubletime flows, to song structure, to adlibs, to production, even the fucking album artwork is slick! In terms of vibe, the album is quite consistent – it echoes that kind of dark, moody feel that many rappers who excel at multisyllabic lyricism tend to project. The language used is intelligent and spans a wide range of vocabulary, and is arranged around imaginative and creative track concepts. It is charged with emotion in many places, but is also fun – a great example is ‘It’s Abnoxshuz’. I think what differentiates this (and 3HB in general) from most other UKHH rappers is the fantastic chemistry between the 3 emcees and their memorable and musical hooks. Each song had me bobbing in that unconscious way any good hip hop song does. You know the one – the one where your chin jabs in and out like it’s fucking an invisible chin-vagina right in front of you. Pretend you don’t understand because I know you all do.

If I had to make any criticism, and considering this is a review I probably do, I would say that after 15 back to back tracks of solid multisyllabics, the themes and formats can get slightly repetitive. This doesn’t mean anything in regards to the individual quality of each of those tracks – but as a whole, they do follow on from each other in a very similar fashion. If you guys read this (and I hope you do) my only advice would be to try some more unique, experimental crazy stuff. But then what the fuck do I know? I wish I could make an album like this!!

‘Time To Feast’ is out now digitally as a ‘Name Your Price’ download, don’t be a cheap skate and go for the free option this release deserves your money. There are a limited number of CD’s left if you wanna cop a physical copy on the bandcamp page,  Stream and download Three Headed Beast ‘Time To Feast’ LP here….

Head to their Bandcamp Page for more dope music and Merch https://threeheadedbeast.bandcamp.com/