We were lucky enough to get our hands on an early copy of Cyrus Malachi’s much anticipated second album ‘Black Athena’ released via the homies at First Son Records available to pre order with a release date of April 20th. So we threw our newest recruit to the team Adam De Leslie in at the deep end to review this UK heavyweight emcee’s upcoming release. Here’s his review…..

Hip hop is a funny game. Either you love it or loathe it, and if you love it you probably have your view on what ‘real  hip hop is’. One listener’s Heaven is another’s Hell. Then there are albums like this. You would struggle to find someone who would dislike such a natural sounding collection. Start to finish replay value.

17 tracks and not a single one you could call filler. I don’t mean to just lavish praise on this but as I say I can’t really see anyone disliking this.His flow is classic but with his own personality, which is what makes it so enjoyable to listen to. Not that this is a man who is here purely to entertain you, Cyrus has real messages. Yes, we’ve all heard ‘political’ or ‘conscious’ rap before but he doesn’t just preach in that angry manner that can really wear thin over a whole album. He just wants you to understand the things he sees as wrong. I love that kind of honesty, wins me every time. Drawing you in with lyricism this album asks a lot of you, it asks you to listen, to really listen.  But rewards you justly. A thinker, a reloader, one of those you show people who don’t listen to ‘this kind of thing’ to sway them. Standout track for me is track 10- Lions Den. Old skool storytelling style. Real personal subject matter . Again, honesty.

THE PRODUCTION IS HEAVY! Okay didn’t mean to get so rowdy but yeh, this is my shit. Boombap is an overly used term but rarely applies more than Black Athena. Each song kicks my subwoofer along the ground. With Production from the likes of 7thDan, Ringz Ov Saturn, Hellz Echo, Noize Thievery and more it felt like a complete work rather than a bunch of beats and bars. I dare you not to knod your head throughout.

Black Anthena is no imitation; Cyrus is not simply a man who wanted to be a rapper but quite clearly one who is at home on a mic. I screw faced A LOT.

Cyrus Malachi’s ‘Black Athena’ is available to order in CD version of the 17 track album with  hand painted illustrations by Gary Alford on the cover. A limited amount of pre-orders will ship with a limited edition copy of Cyrus Malachi’s “Isis Papers 3”  mixtape which is unavailable to buy anywhere. Release date is 20th April. Pre Orders will be shipped for the 15th of April Pre-order Now ₤12.99

Also available to Pre Order in digital format, with a FREE download of a track of your choice Pre-order Now ₤7.99

Download for FREE or stream the track ‘Contraband’ taken from the album here…. 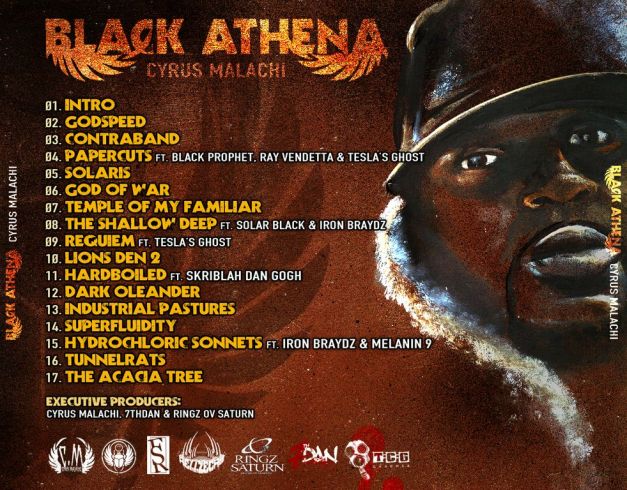