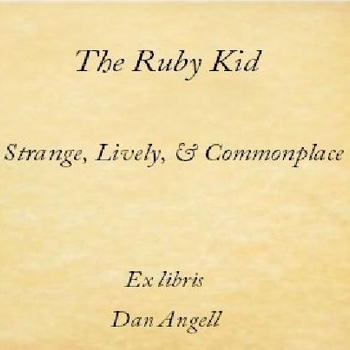 East London rapper and spoken-word artist The Ruby Kid (hands up who likes me saying exactly where the artists are from?) has recently released his second EP ‘Strange Lively & Commonplace’, teaming up once again with producer and DJ Dan Angell. The EP is only 4 tracks long, and serves as a bridge between his first EP ‘Maps’, and his much lengthier record ‘Maps II’ which will be out next year (12 months eh? Well that sure narrows it down).
As I mentioned previously, this is only 4 tracks long, which immediately felt too short for me. Not only did it not outstay its welcome, I was actually annoyed it wasn’t longer. Not a big feat considering its length you might stay? Well trust me, I’ve heard 4 minute songs that outstayed their welcome after the first 90 seconds-so yes a feat, a considerable one.
From the very outset of the title track the change in pace, style and even flow of this record in relation to The Ruby Kid’s earlier material is obvious. I don’t want to say it’s more ‘poppy’ or ‘melodic’, because that doesn’t really mean anything, and would do a disservice to Dan Angell’s production skills. Which by the way; really shines through on this release. However it does sound like The Ruby Kid has cut away with some unnecessary elements within his songwriting, and style. What those elements are, I can’t quite explain to you; but hey man it’s art yeah. You try to describe what a circle looks like to someone who’s never seen shapes…Yeah deep. You’ll just have to listen to it won’t you? Back to the change of pace, style and flow. It’s not to say the dude isn’t still extremely abstract, and surreal because he is, and quite frankly he wouldn’t be the same rapper if he wasn’t. There’s just a significant change in style that will only notice when played next to his previous releases.

It sadly took me two listens to realise that the characters ‘Amanda’ and ‘Benny’ in ‘Benny & The Crow’ were about actually drugs (An East London spoken-word artist talking about drugs, who’d have thought it?) Unless, they are people and not drugs? Maybe they are people and aren’t, all at the same time! ZOMGZ MY BRAIN! NOTHING IS REAL ANYMORE! But I doubt it. Aside from having my mind blown, the lyrical imagery is fantastic in this song and perfectly pinpoints the feeling of being high on naughty things you shouldn’t be. Although this isn’t a one time occurrence (the imagery I mean, not the drugs. A boom, boom schh). Each track on the EP is its own little vignette in its own right, and fits perfectly next to the other. Ruby Kid’s storytelling, and his use of descriptive language have really upped a level on this EP, and I hope he can mix in this new progression with his previous work, for ‘Maps II’.
I was also really excited to see that  Sensei C from H.L.I makes a guest appearance on the EP, and the two rappers, along with Angell’s production make ‘August’ one of the best songs on the EP. Such a good pairing. I’ve only known of H.L.I for a few months, and I was really happy to hear more verses from him. We’ll be interviewing the H.L.I boys in the next few weeks as it happens, so look out for that one.

Now, now it’s 1:30am (well when I post this it’ll be probably be in the afternoon) and I am on a rolllllllll tonight, but as I have kept reminding you this is only a 4 song EP so to over-critique and analyse it any more might run the risk of, dare I say it? Boring you. I will then end this review here saying: this is a really well thought out, interesting and extremely memorable release. This is an obvious continuation to ‘Maps’, but a stand alone piece in its own right as well. There’s nothing worse, and sadder than when one of your favourite rappers disappoints you. Well he didn’t, he gave me more reason to listen; so now it’s your turn.

(Seriously though, how could I not realise the whole song is about doing drugs? There are skits about buying drugs at the end and the beginning of the song ffs.)