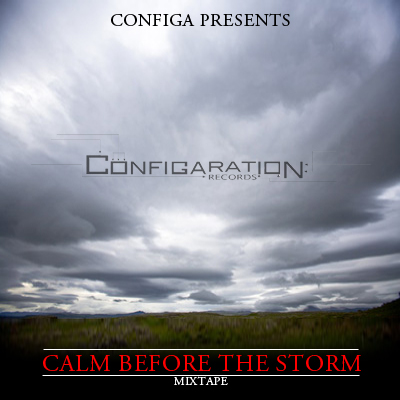 Evening hipada hopada land. What you saying? Fancy reading about Configa’s mixtape ‘Calm Before The Storm, and having a cheeky listen all at the same time? Oh my days multimedia, technology is everywhere!
This was actually released last August via Configaration Records, but the man himself kindly sent us a copy recently so we couldn’t not give it at least a few words. Maybe you’re already a fan, maybe you’ve never heard of the dude well either way keep reading.
‘Calm Before The Storm’ is a mash-up tape of UK and American, as well as pretty gutter-level and well known MCs amongst the underground scene. For example, I’ve known for quite some time that I’m a big fan of Jaz Kahina, but until I heard this I wasn’t aware I loved John Graham too. I love mixtapes like this; they sort of ease you into liking new artists all safely nestled in between some of your favourites, like “Oh shit, where did you come from? Snap I’d better buy everything you’ve ever touched or I’ll surely die”. Well maybe not that extreme but I’m sure you catch my meaning, and I respect that Configa can pull that off without forcing it down your throat. I don’t need to be shouted at, I need to be encouraged. Ya get me fam?

After listening to a few other releases by Configa Records (you can check our recent review of HaStyle’s Hair Cuts) and especially CBTS where they are even more evident, I’ve come to a few conclusions. The main conclusion being, you can most definitely without question hear the ‘old skool’ and golden age influences. Now when I say this I don’t mean those records that are so obsessed with ‘bringing hip-hop back’ that they rehash the past and go over the same tired cliches. I love me some old skool, but I don’t need to hear a cheap cover band do Melle Mel impressions for 12 songs. I want to hear how those artists and legends have impacted the music you’re now creating. There’s a lot of good artists who do this well, and Calm Before The Storm is a perfect example of how to incorporate all the new and interesting music of current, as well as not forgetting the roots of hip-hop, culturally, politically and musically. Which is why, throughout this whole album you won’t hear talk of bitches, bling and drugs. It’s straight progressive, fun and intelligent music by a bunch of MCs that were clearly having a good time when they made this.
I’m not gonna do a run down of the whole album because yo, it’s 20 tracks. Whatyawantfromme!? I’d say 3’s enough, ’cause 1’s luck, 2’s fluke and 3’s habit.

‘Come Over To My Place’ by Grey Matter is a track about trying to get the attention of someone niiiiice, and whilst the lyrical content could easily fall into some cheesy areas, Grey Matter manages to dodge the cheese cake with lines like “I’m fully grown and I ain’t tryin’ play games. And I ain’t gonna smack you up like Chris whatishisname?” Haha yes! Fuck you Chris Brown, tens point to Grey Matter.
You might have already heard ‘We On Fire’ ’cause the video’s still blowing up on YouTube, but for those of you who haven’t yet this is a classic track from Jaz Kahina. Killer content, killer flow and spitfire pace. If you spend all your time trying to catch up with her, you might miss the sharp verses she’s spitting.
“What the fuck’s going on with hip-hop son? Same bullshit. Talking about ‘shorty this’, or ‘in the club’ that. It’s like diamonds and chains and all that bullshit. Fuck that, it’s about this shit real”. That’s the intro for Nut Kaze’s ‘Same Bullshit’ and if you don’t like this track you’re an idiot son. Safe.
The best thing about this song is how fucking angry Nut Kaze is. He could easily be a roadman rapper, talking about real greasy shit but instead he’s telling you better stop being a radio rapper or he’ll kick your ass. In the nicest possible way of course.

I know I said only 3 tracks, but screw it I don’t care. ‘There Goes The Sunshine’ by Corporal Asskick and Rockaway Jah is so good. This right here is how you tell a good story, and use narrative to your benefit as a rapper. Take note. The samples are pretty tasty too.

So there you go kids, ‘Calm Before The Storm’ is how you write a record using influences of the past, every day life and make it all sound progressive and new.
To hear the album and get yourselves a copy have a go at some of the links below.

Recommended If You Like: Early Nas and Jay-Z (for real), BlestEnation, Pacewon, J-Roots, Jedi Mind Tricks.
Stand Out Tracks: ‘We On Fire’, ‘There Goes The Sunshine’, ‘I Want You’, ‘Come Over To My Place’.

One comment on “Configa Presents: ‘Calm Before The Storm’ (Album Review & Stream)”