Posted by hiphoplifeandtimes on October 27, 2011
Posted in: News. Leave a comment 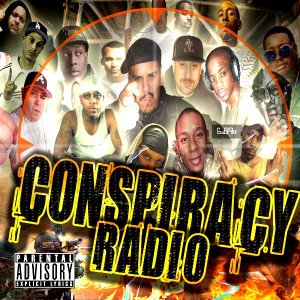 The beauty of the internet that for every ‘Top 40 Urban’ and ‘crunkrap’ radio there’s also the likes of Conspiracy Radio and The Friday Night Live Show representing real hip-hop from the ground up. These dudes have been going at for a good couple years and have racked up a beyond impressive list of guests ( Public Enemy, Eric B & Rakim, RZA, GZA, P.O.S, Lowkey, La Coka Nostra. To name a few!) Whether the artists have sold 2 million records or 2, then you’ll hear it played. Check out this Friday’s show, they’ll be interviewing Immortal Technique. I’ll be listening fangirling out and so should.
I’ll also be doing a pretty in depth interview with the Friday Night Live Show’s co-host and Conspiracy co-manager, Menace very soon.

In the mean peep some of their past shows.

Posted by hiphoplifeandtimes on October 26, 2011
Posted in: Art, Music Videos. Leave a comment

I know I just posted two videos by Prince Ea, but this song needs a whole new post on it’s own. Backwards rapping!

Posted by hiphoplifeandtimes on October 25, 2011
Posted in: Downloads, Music Videos. Leave a comment

One of my very, very favourite American rappers and all round good dude Prince Ea decided to write a song for his hometown baseball team the St Louis Cardinals. Now I don’t know much about baseball, my expertise lies with footy and basketball but I can understand the passion. Plus I love Prince Ea and you should too! You can get the song for free by clicking on the links below.
I’ve also decided to post an extra called “The Brain” because it’s a guide on how to write intelligent, lyrical massive and catchy verses you all need to know.

That’s right kids, mixed and hosted by our very own Mr T.ricksta. Not only is this a free mixtape you’ll also get to hear Tricksta’s angelic voice at the introduction of the record.

Aside from the awesomeness of that let’s get down to the actual record itself. The first thing that sprung to mind upon listening to “Unleashed..” is the realism. Now I know there are a million and ten rappers out there “keeping it real” (yeah real dumb) but this really is realist hip-hop in its purest form. Jesse James has pretty much seen and down it all by the sounds of this mixtape. Robbing banks, getting banged up the whole nine yards. The thing however that makes him so different and original is unlike all those radio rappers out there taking your little sister’s pocket money, Jesse never once makes an attempt to glamourise or promote the darker side of street life. He simply tells the story of how and why these things have happened to both him and his friends; if anything the darker and grittier the record becomes the more he constantly reminds you where he now is. Which leads me to the next part! Dude’s currently behind bars but yet manages to record freestyles entitled “Prison Tapes Freestyle”. There’s 3 in total and some of my favourite tracks on the album simply because they’re grimey, dirty and some DIY goodness. Plus they’re all catchy as fuck!

Jesse James main influences on “Unleashed..” are hip-hop and grime and he does a good job of mixing these two genres up with a healthy dose of Jamaican patois sounding vocals, despite being from South London it is refreshing to hear a different take on the vocals. Not to say he’s the only one out there doing it because we all know he’s not, but none the less I thought he did a better job than most. I can’t be doing with faux Jamaican accents from kids who once flew over the Caribbean but never actually had any other attachment to the place. “Big Belt” is a good example of how he mixes the British and the patois perfectly with a simple but catchy beat and well versed flow.

To me it’s nice to finally hear a record by a rapper that whilst hasn’t been the straightest living dude on the planet, still has no time to talk about materialism or bitches. This is a dark and grimey release, but there in lies its charm. The tracks are tight and well written, the flows are banging and if you want to listen to some real street level hip-hop than look no further.

Recommended if you like: Hearing Tricksta’s sexy voice! Logic, Black The Ripper.

Posted by hiphoplifeandtimes on October 25, 2011
Posted in: News. Leave a comment

For those not in the know (and quite frankly if you’re a hip-hop head I’m assuming you’ve just been living under a rock) Mr Dibbs is a massive DJ/producer/innovator in underground hip-hop. He’s the founder of turntablists collective 1200 Hobos, tour DJ for El-P and Atmosphere, founder of Self Core Records, and of course family member of Rhymesayers Entertainment. Anyway, Mr Dibbs is very ill and here’s what we as a community can do to help!

“Mr Dibbs, the innovative DJ and producer, the one who has given so much of himself and his heart through music, entertainment and now food, has come to a place in his life where he is in need of our help. Last month he was diagnosed with Cirrhosis which is the scarring of the liver and poor liver function. It is the final phase of chronic liver disease. He is no longer able to work being that he is in and out of the hospital too much. In just a month, having no insurance, his medical bills have reached over $485,000. Please, if you can spare it, any amount would help. You can make donations directly to Brad through the paypal account email Hellkitchen@netzero.com. Go to PayPal.com, click send money, in the TO address type in: Hellkitchen@netzero.com. You can follow Brad’s progress at www.twitter.com/mrdibbs. Thank you all.”

Posted by hiphoplifeandtimes on October 25, 2011
Posted in: Music Videos. Leave a comment

Sincere – Fire In The Booth